The Ballad of the Undifferentiated Product 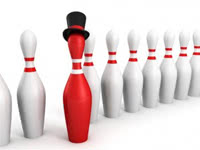 I’ve been doing a lot of work with clients lately on refining their messaging and marketplace differentiation. It has always been clear to me that this is not a trivial thing. Unless you can carve out a unique value proposition for your offering, and communicate that proposition in an arresting and compelling fashion, you’re dead in the water. What I am increasingly coming to understand, however, is how courageous companies need to be in doing so.

Any time a company sharply focuses its messaging on one promising market segment, it runs the risk of turning off other market segments that are also attractive. You have to be okay with that, and that’s the daring part. Because if you try to be something to all people, you will end up being nothing to everybody. A lot of companies have trouble with that. They’d far rather be singing the ballad of the undifferentiated product, an inoffensive little tune that has a few notes everyone can hum along with but no commanding presence that’s going to make it a chart topper.

We are pitching a significant piece of business these days to a company whose product could be viewed as one of the most commodified items on the planet. In fact, many sellers of this product charge exactly nothing for it, understanding that it has little inherent value and is merely a minor loss-leader on the way to selling something more valuable. You’d think this would be a hopeless case for marketers. Except that our prospective client has a version of this product that has an utterly unique value proposition. (Ya, I know; unique is not supposed to take adverbial qualifiers — I’ve added one here for pure emphasis.) For a relatively tiny segment of the marketplace — fortunately, a segment still so large that it adds up to a pretty attractive business case — our client’s product is the only way that segment can achieve its objective. In crafting its messaging to capture a grossly unfair share of that segment, our client is going to willingly abandon practically everyone else who buys this product.

In fact, it’s better than OK. Done properly, this company has the opportunity to entirely own the segment for which its product holds this unique value. Even better, it also has the opportunity to expand that segment by promoting the attributes that its unique product version represents. Fortunately, the company realises it has this potent product differentiation, and it is perfectly willing to accept that most of the rest of a vast marketplace is going to go somewhere else because it was never going to get any meaningful share of that vast rest of the marketplace anyway. It might seem obvious, but it’s actually pretty daring–and all too rare–for a company to willingly abandon a seemingly huge opportunity because it knows it holds no unique differentiation there.

Six Messages Too Many

My second example is a company I’m currently working with. In our first session, we went through a standard positioning exercise, the object of which is to define messaging that communicates how a product solves a specific pain for a specific market segment in a way that creates value that is unique and different from the most common competitor in that segment. We ended up with nine (!?!) positioning templates, each of which was saying different things to different segments of the marketplace.

There is no way you can stand out if you are saying nine things. Period. When you’re in that situation, it’s time to fire up the still and start purifying the messaging.

A cursory analysis of the various pain points for which we had developed positioning statements revealed that most of them were really just paper cuts, while one or two were genuine bleeding-from-the-neck problems. So we developed new, far more sharply distilled positioning templates. We developed one for the target market segment that has a clear pain which this company’s product solves in a way that creates massive and unique value compared to the competition. We developed a second one for an important sub-segment of that market, a sub-segment where this company was gaining significant traction, and where an additional product attribute created a further, very-high-value outcome that was critical for this market segment. And we created a third template aimed at a segment of the market that might be overwhelmed by the enterprise-grade messaging necessary for the first two.

Rolling out this three-part messaging is now a simple matter of tactical implementation. Different campaigns and content appealing to each of the three target market segments can be created, with landing and subsequent pages that talk exclusively to that segment. Undifferentiated traffic coming in the front door can by triaged right on the home page, again leading to sharply focused subsequent messaging.

There will almost certainly be well-qualified potential customers who come to this company’s website, fail to identify with any of the three segments represented there, and go elsewhere. The daring part comes in when the company accepts that that’s okay.