IT Project Run or Pass – What’s Your Football Persona? 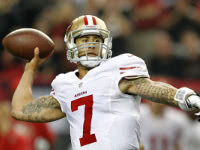 Having recently attended the 49ers demolition of the Jaguars at Wembley Stadium, and with the news that my beloved Cowboys are paying me a visit for the NFL International Series in 2014, I got to thinking about how a football team relates to IT projects.

For me, the way an IT solution is deployed in today’s environment can be thought of in a similar way to an offensive coach’s play calling strategy – namely, run versus pass.

Most offenses will start by heading to the run game. This is the tried and tested route – it probably won’t get you big yardage, but it will get the ball moving forward. It’s the equivalent of existing IT systems or an on-premises deployment of a new system. The organization can remove as many unknown elements from the equation as possible and move forward at a manageable pace. 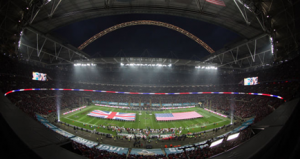 However, there are costs. From an IT perspective, servers, networks and the associated staff are not cheap – the football equivalent of the amount of time it takes for a run play to make 10 yards. Oh, and did I mention that sometimes the running game does not make the progress required to get to the next stage? Reliable and solid, but largely unspectacular – unless you happen to have the IT team equivalent of Adrian Peterson on your roster. But looking at the stats, the run game has been in decline since the early 80s.

So What About Passing?

Pass mode looks to deliver the maximum benefit to the team as quickly as possible. This compares in many ways to a cloud deployment for an IT department. One of the benefits of passing is that you can get to the goal-line a lot faster – much like the speed of deployment benefit of a cloud solution. Also, it saves resources. You only use one play and a lot less time off the game clock in football or less in-house server, software and staffing resources for IT. But even if you decide to pass, there are still choices you have to make – and as with the Cowboys pass offense, some are riskier than others.

Maybe the business chooses a public cloud because it is cheaper and quicker to deploy than a private cloud — imagine your CEO as a defensive end chasing you down. Compare this to a Tony Romo long pass on 1st down from his own 20. It might work – but then again there is every chance that it won’t. 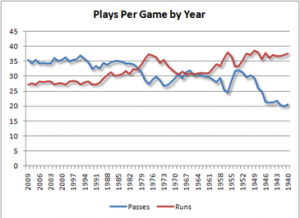 A more balanced play – the percentage play some might call it – may be the short pass to the tight-end for a gain of 10. Still quicker than the run, but not as risky as the all-or-nothing long pass. For the business, this might mean choosing to move certain areas such as HR or Accounts Payable to the cloud first – should they be successful, the organization can roll out further projects accordingly.

So, back to the original question – do you go pass or run?

On paper, the run looks like it should always be the “safest” choice and the pass appears to always be the most risk-laden option. But, that’s a misleading or inaccurate perspective. If there are only two minutes left on the clock, you’re on your own 20 yard line and you need at least four points to win the game, a run is probably the riskiest play the coach could call because it’s unlikely to produce the desired outcome.

Therefore, a “completely balanced” offense aligns the risks associated with each play in the playbook with the specific criteria needed for the business to produce a “win” at any particular point in time, in order to select the most appropriate option. And with the cloud offering highly secure data centers, encrypted in-transit connections, built-in redundancy and data replication, you’re organization’s information is as safe as a quarterback behind an offensive line full of 400-pound men.

As for your role within your business – do you want to be a running back or a wide receiver? It’s an easy one for me and Phil Simms summed it up perfectly when he said, “You can see why all the kids want to be a wide receiver. They’re fast, spectacular and get all the glory – who wouldn’t want that?”

So what’s your IT football persona?

[This post originally appeared on the Hyland blog and is republished with permission.] 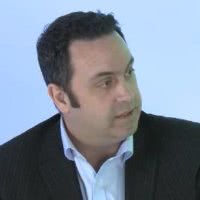 David has almost 20 years’ experience of working with users and vendors across a wide range of vertical markets. His experience has focused on taking complex technologies, such as data mining and document management, and developing them into commercial solutions ...