Twitter: Your Best Free Tool for Business Intelligence and Innovation 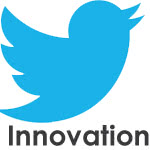 This is the first post in a series where I look into how you can use the four leading social media tools—Twitter, LinkedIn, Facebook and YouTube—to advance your innovation agenda.

Let’s start out with Twitter and how it can be used for innovation efforts.

Twitter is a micro-blogging site via which users share updates in “tweets” that are limited to 140 characters. Users build audiences of “followers” and also choose to follow other users, read their content and then share some of it with their own followers through what are called retweets.

Think of Twitter as the global watercooler, where people come to share information and opinions, to keep up on breaking news, and to hear what others have to say. And according to Alexa, a Web information company that tracks site popularity and demographics, it is a pretty crowded watercooler. They say Twitter is the world’s ninth most popular website, with over 10 percent of Internet users visiting Twitter each day. Estimates for the number of people who have Twitter accounts are as high as 360 million.

However, it is widely acknowledged that the majority of these people are not active users. Although Twitter has carefully guarded its user figures, in September 2011, they did announce that they had reached a major milestone by having 100 million “active” users. By March of 2012, they revealed that this number had grown to 140 million. At that time Twitter said that one billion tweets are posted every three days. They define “active” as signing on to the site at least once a month.

Business intelligence
The key benefit you can extract from Twitter is business intelligence. It is a great tool for monitoring keywords and since many tweets include links to articles and more, you get access to a wealth of information.

You need to use a filtering service such as HootSuite in order to be able to sort through the information available. Once this is done, you simply use a keyword search to find what you are looking for. You can also use a mechanism known as hashtags to track tweets related to topics that interest you. A hashtag is a keyword or phrase that has the symbol # added in front of it. Tweeters add hashtags to their tweets to make it easy for people to follow a conversation on their topic. Thus, if you’re interested in tracking open innovation as a topic, the hashtag to search for would be #openinnovation. By going to twitter.com/search, you can search for all types of topics.

Broadcast your ideas and insights
You can tweet about new developments in your innovation program or simply share ideas and insights. Here you can include links to websites allowing readers to read further. When you tweet like this, you hope others will pick up on your messages and re-tweet to their followers. Twitter has strong viral opportunities, but you need to have some patience and be prepared to spend significant time to build up your reputation – and the number of followers – before you can expect this to happen.

It is my experience that you need thousands of followers before you will see real activity based on your tweets. Thus, it makes sense to work with corporate accounts allowing colleagues to share the work burden of building a Twitter account worth following for others.

Conduct Twitter chats
Business intelligence and broadcasting are by far the best ways in which you can use Twitter for your innovation efforts. Another idea could be a Twitter chat. This occurs when you set a date and time when you’re going to be on Twitter talking about a specific topic. You develop a hashtag for the topic and then you invite people to join you at the appointed time and tweet about the topic.

I’ve done this several times with a good deal of success. For example, I may announce that I’m interviewing an open innovation leader at a company; I’ll tweet questions to the person I’m interviewing and he/she tweets answers back. But instead of just being a two-way conversation, with Twitter you can join in, too, asking questions or making comments.

You can use Twitter chats to talk with any group you wish to involve in your open innovation effort. For example, I have seen companies cover “internal” topics in the sense that it starts out as a chat for employees, but since this is public to everyone, they hope for others to jump in on the discussions.

One thing to be aware of is that as Twitter chats become more popular and common, I’ve been in some where there were just too many participants; this results in too many tweets for there to be a discussion back and forth. Nevertheless, such chat can still be valuable sources of inspiration, and they also help you identify interesting people to get in touch with.

Check out #HBRchat and #Innochat for examples of how successful such chats can be.

[This post originally appeared on Stefan Lindegaard’s 15inno blog and is republished with permission.]

Author, Speaker, Consultant, Twitter: Your Best Free Tool for Business Intelligence and Innovation
Expert in Open Innovation, Social Media and Intrapreneurship
Stefan Lindegaard is an author, speaker and strategic advisor. His focus on the topics of open innovation, social media tools and intrapreneurship has propelled him into being a trusted advisor to many large corporations. He believes open innovation requires a ...