The news that Androids have surpassed iPhones in sales has exploded quite thoroughly across the Internet. Canalys research firm finds that Android market shares went up to 17% in the second quarter from just 3% the year before. This market growth does not seem to be slowing down, either; on August 4th, Google CEO Eric Schmidt said that Android registrations hit 200,000 a day, up from 100,000 in May and 160,000 in June.

But what will be most interesting to see in coming months is how well Androids do in comparison to other smartphone products in business settings.  iPhones are already doing very well in the enterprise. In May, AT&T stated that 40% of iPhone sales were for businesses.

That statistic shows that company employees like their iPhone so much that they are willing to bring it to the office, and employers are letting them. The iPhone is evidently a versatile device that can be business compliant and adopt enterprise functions.

But that’s also becoming true for Androids. The Android 2.2 OS includes improvements such as email integration, security, and remote management, crucial for enterprise use. Androids can further pose a problem for iPhones because of their variety (available on all carriers) and well, perhaps the fact they have real keyboards. The iPhone, along with the incumbent BlackBerry, could very well be overtaken in the workplace. 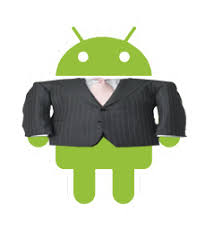 On ZDNet, Tim Renowden, Ovum’s device and platform analyst, said that Androids have a hardware advantage over iPhones because they offer more choice in terms of features, costs, and modification. Similarly, Scott Schwarzhoff, vice president of marketing for Appcelerator, cites the unrestricted use of the Android OS as a way to allow “unique enterprise implementation scenarios.”

Both concede that Apple still as a bit of an edge in terms of third-party software and system support. Renowden still notes that Android is “improving rapidly” and both platforms will be on level ground soon enough.

A Google spokesperson said, “We are receiving great feedback from businesses and vendors alike. IBM, for example, recently made a statement that it sees Android devices as suitable business tools with its release of its Lotus Notes Traveler software for the platform. At the same time, Gartner also gave Android devices a thumbs up for the use of corporate e-mail, personal information management, Internet browsing and telephony.”