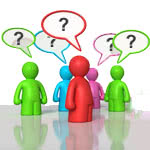 So you’re connecting like a madman on LinkedIn. Your Facebook likes are growing by leaps and bounds. It’s hard to keep up with the number of people following you on Twitter. You’ve got Pinterest and Google+ aced.

No matter where you look, there are articles, discussions, and blogs on the importance of social media marketing. There are articles telling us what tools are best for managing the various platforms. There are discussions beyond counting on how to engage your audience. (Talk to them about what interests them). There are blogs coming out on an almost daily basis telling us how to measure influence. And on and on.

It’s time to bring the discussion back down to earth.

For example, I have 189 connections on LinkedIn. (I don’t actively pursue connections.) So, according to LI, I am connected to 7,862,780+ professionals. Really? Does that mean that people with 1500 or 2000 connections can reach most of the professionals in the known universe?

Don’t get me wrong. I like LinkedIn. I’m just a little dubious about the mania to connect. Think about your connections. With how many have you actually had conversations once you connected? Given or gotten referrals?  Been introduced to your connections’ connections? Probably a few, but I am reasonably sure not 7 million.

And Facebook is a stellar example of how one size does not fit all in marketing.

For all the hype, Facebook is not a particularly good venue for B2B marketing. It wasn’t designed to be.

And on Twitter, I regularly get “offers” to help me add 1,000 or 10,000 followers in a week. Terrific. We are back to the numbers game. There are people on Twitter who have 10 or 20,000 people they follow and who follow them. Does anyone really believe that they pay any attention at all to the tweets that fly by (at close to the speed of light) on their screen when they check into Twitter?

It’s time to stop seeing the social media platforms as a numbers game. We have to get past “counting coup,” the concept that we can measure our success outside the battleground of the economic marketplace.

We are in the economic marketplace. Just as hits on Web sites aren’t particularly meaningful unless they translate into leads and sales, so, too, a social media following – even with “engagement” – isn’t enough.

So am I down on social media?  Not at all. But I think it’s time we pay attention to what these platforms can do as opposed to what we’d like them to do, particularly in the B2B space.

Understood and used correctly, social media are a vital and vibrant addition to the marketing toolbox. Misunderstood and approached with unrealistic expectations, you will be left with a heavy investment of time and energy, unfulfilled promises, and no noticeable increase in revenues.

President, Competitive Advantage Marketing, Inc.
Expert in Marketing Strategy & Tactics
Emily R. Coleman has more than 30 years of hands-on experience in virtually every aspect of marketing. She is known for her creativity and innovation. More important, she understands how to develop strategies and implementation tactics that benefit ...