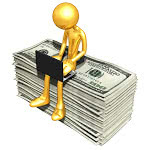 In some cases there can be several intermediary baselines. This happens when either the project was not well-planned or when significant changes alter the scope of the project. However, the initial baseline is usually what gets budgeted in the company’s financials. All types of baselines are closely related, and changes to one of them will result in changes to the others. If a change is made in the project scope baseline, the schedule baseline gets adjusted, and hence the cost baseline will probably have to be changed as well.

How Is Cost Baseline Created?

When it comes to computing the total cost of the project, some estimates need to be done. Once the project schedule is ready and approved, a bottom-up procedure should be used where for each activity of the project a detailed cost is estimated. This way a total cost for each major phase and for the entire project gets computed. These initial costs of all of the planned activities will become the initial estimated budget.

According to PMBOK the cost baseline is a “time-phased budget that is used as a basis against which to measure, monitor, and control overall cost performance on the project.” But many factors can affect the cost performance of a project, so the above estimated costs established during the planning phase might not be estimated that well. The true costs of certain tasks may not be well-known at planning time. If a given price for materials, training, or travel costs is taken into consideration at planning phase but at execution time is increased, there is an unforeseen additional cost.

Time is another factor that can affect the costs. The time frame for task execution may vary, so this will have a direct impact over the estimated cost of that task. If a task duration was not well estimated and for certain reasons it is increased, this will result in more work to be done and hence an additional cost. If budget is fixed for the project, the manager will need to find a solution to reduce costs in other areas of the project. One possible solution would be to remove other expendable tasks, but in this method the project deliverables might be affected, resulting a change in the scope baseline and further more a change in the schedule baseline. Another approach could be to use less expensive resources. But there is a drawback to this solution: less expensive resources usually have less experience or a restrained skill set. Thus the result will be the same as in the first case, because tasks might take longer than originally planned and will again affect the schedule baseline.

A certain degree of risk must be taken into consideration when building the cost baseline. The lack of enough money to get the project done is such a risk. Unidentified work is another risk that can affect the cost of the project. That is why it is worth investing time in a well-done project plan.

Using project management software is the indicated and the most efficient way to work on your cost baseline.

[This post originally appeared on the Rationalplan blog and is republished with permission.]