We’ve talked about how to optimize your tweets for the best engagement, but simply writing great tweets isn’t the only way to make your mark in social media. Twitter also offers 3 “Promoted Products” that let you actively reach out and advertise to Twitter users in different ways. Advertising on Twitter doesn’t quite align with traditional online marketing strategies, so we’ve given you a roadmap for figuring out how you can use Twitter’s advertising program to grow your brand and build visibility.

Promoted accounts focus on building your followers by exposing your brand to people who are similar to your existing followers. Your brand show up in the “Who to Follow” box on the left hand side of Twitter users’ pages. Whether your brand is new to Twitter or if you’re trying to build up a larger following, promoting your account is a great way to put your name in front of potential followers. 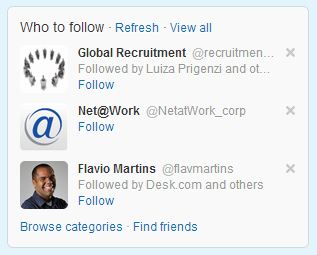 Show off your best work with Promoted Tweets

You’ve finally crafted that perfect Tweet – how do you make sure people actually see it? Tweets generally pop in and out of followers’ feeds in the blink of an eye, but promoted tweets are “sticky” and appear near the top of your followers’ feeds for longer than they usually would. You can also target people similar to your followers, who will see these Tweets pop up in their feeds as well.

Another perk of Promoted Tweets is that they appear at the top of the results page when users search for something in Twitter’s search bar, increasing the likelihood that someone who is actively looking for you or a company like you will see your Tweet.

Trends are a feature unique to Twitter, and you can use Twitter’s focus on curating viral conversations to drive conversations and interest towards your brand. Sharpie and American Express have both recently used this feature to promote hashtags crafted to promote awareness of and participation in their campaigns. Promoted Trends are a great way of influencing campaigns or products to go viral by making them more visible, and making it easier for fans and followers to tweet about them in a unified way. In Sharpie’s case, they’re using the tag #SharpieHELLO to encourage people to tweet pictures of Sharpie-inked messages online. Promoted trends are excellent for building buzz about products and ideas that last longer than the lifetime of a single tweet. 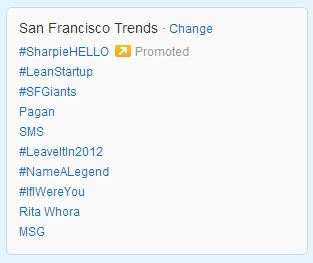 If you’re a small business owner, you’re in luck – right now Twitter is helping out small businesses to help them build deeper connections with their customers and spread the word via Promoted Tweets and Promoted Accounts. They’re offering $100 in free Twitter Ads to the first 10,000 qualifying companies that sign up before the end of 2012, so if your budget is tight can still share in the benefits of advertising on Twitter. If you’re part of a U.S.-based business with at least 20 followers and an active Twitter account, it’s worth it to sign up today to see if you can score $100 in free ads.

Are Promoted Products Right for You?

The main benefit of advertising on Twitter is the guarantee that your ads will reach a massive audience. Twitter also offers analytics for all three promoted products, so you can easily track the progress of your campaigns and use those insights to improve your marketing strategies. But Twitter isn’t necessarily the best place to advertise your brand. As usual, you’re limited to the space of 140 characters, so there’s no room for long copy on Twitter. If an image or photo is integral to your campaign you can embed it in a tweet, but users will have to click through to see it. Additionally, Twitter does not offer great flexibility when it comes to targeting your audience. You can promote your account to followers by country, but not by specific interest. You can also opt to target people whom Twitter has “identified as most likely to have interests similar to your account,” but Twitter doesn’t offer much transparency as to what constitutes “similar.”

Price can be a deterrent for businesses looking to advertise on Twitter. The minimum ad spend for a 3 month commitment is $15,000 for a campaign of both promoted accounts and promoted tweets, and Promoted Trends cost a whopping $120,000 per day. Luckily for businesses with smaller budgets, Promoted Tweets start at just $.10 and are charged on a cost per engagement (CPE) model, so they’re a viable option for even the most budget-conscious companies.

To learn more about social media and the social tools that will aid it, visit the social top comparison reports.