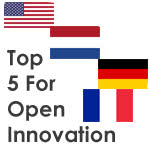 I have the privilege to travel the world in order to meet with corporate innovation teams and work with them on their issues. This gives me a pretty good understanding on what is happening with open innovation globally so here comes a list of countries that in my view do well:

No surprise here. This is where it happens. We have the companies, intermediaries/service providers, top academics and all the best conferences. There are simply too many to mention here.

Many Germany-based companies including BASF, Beiersdorf, Siemens, Deutsche Telekom, Bombardier, Lufthansa and SAP have embraced open innovation or they have strong initiatives for the kind of knowledge / innovation communities that I believe will be very important in the near future. Germany is well-represented on this list: 40 Examples of Open Innovation and Crowdsourcing.

Germany also seems to be the place in Europe (together with the Netherlands) with the most relevant conferences and events although several of those are in German language only. Germany also has several service providers including Hype Innovation, which does a good job on educating their customers and the community.

I did not have much trouble naming the U.S., the Netherlands and Germany for the top three spots. Now, it gets more tricky as I don’t think other countries can match these three although several countries such as France, United Kingdom, Chile, Brazil, Sweden, Singapore and South Korea have the potential to develop into regional or perhaps even global hotspots.

I used to have the United Kingdom on my top 5 list, but I think the fourth spot now belongs to France. One reason is service providers such as Hypios and bluenove (check their report on Open Innovation in France). I am also getting in touch with a growing number of corporate innovation teams in France although I must admit that I have not yet worked with any of them.

I will leave this slot open and have you help decide which country we should add here. Please drop a comment on which country you choose and why.

One big disappointment is the Nordic region and in particular Denmark (with the exception of LEGO). Many Nordic companies do well on innovation in general, but they just seem to miss out on open innovation. They need to get their act together or risk falling behind.

Back to the number 5 spot… Should your country be on the list? Drop a comment and “vote” for this fifth spot…

[This post originally appeared on Stefan Lindegaard’s 15inno blog and is republished with permission.]

Author, Speaker, Consultant, Top 5 Countries for Open Innovation
Expert in Open Innovation, Social Media and Intrapreneurship
Stefan Lindegaard is an author, speaker and strategic advisor. His focus on the topics of open innovation, social media tools and intrapreneurship has propelled him into being a trusted advisor to many large corporations. He believes open innovation requires a ...