ChangeWave, the market research company, announced that the mobile operating system that is used on most corporate smart phones is the Research in Motion (RIM) BlackBerry OS. While BlackBerry is still the leading OS, its popularity has decreased since May 2010 by three percent. Google’s Android OS, on the other hand, has dramatically increased since May.

Android’s OS increased by six percentage points, which means that it has grown five-fold since November 2009. ChangeWave interviewd 1,602 corporate buyers. The data poll shows BlackBerry in the lead with 66 percent of all smartphone users, the iPhone OS with 31 percent, Android with 16 percent, Windows Mobile with 9 percent and Palm OS with 6 percent. 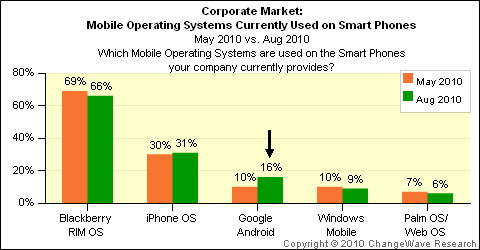 The use of smartphones has dramatically increased in the past few years, with the introduction of a number of new operating systems. ChangeWave discovered that 35 percent of the corporate Internet Technology buyers that the research company surveyed plan to buy smartphones in the next quarter for their employees. Of the 35 percent, 16 percent are thinking about buying HTC devices and 15 percent are thinking about buying Motorola devices. Interestingly enough, the corporate interest in HTC, which is a producer of several Android phones such as the Droid Incredible and the EVO 4G, is higher than ever. Motorola is also gaining some momentum with the release of the Droid 2 and the Droid X after losing customers in early 2007. This bodes well for the Android OS.

This increase in the corporate demand for Android OS phones is shown in the graph below. While BlackBerry and iPhone lead the way, some believe that it is only a matter of time before Android beats them all.