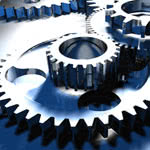 Since their advent near the end of the 19th century, factories and mass production have laid layers of science onto the art of manufacturing. Breaking down microeconomics (a big word for a single organization’s resource management) into quantifiable values resulted in the development of different philosophies of organization, two of them being MRP and Kanban.

Both systems have found expression in software form throughout the years, and are available primary as add-ons or modules to larger ERP solutions, particularly those geared towards manufacturing firms.

As is mentioned in the following section, MRP and Kanban are more closely related than one might guess, and both operate with three core objectives at their heart:

The level to which either system makes these into explicit features varies, for example, Kanban is far less concerned with demand forecasting, letting existing demand drive production activities. One of the most fundamental differences between the two is the discrepancy between “Push” and “Pull” manufacturing.

Push and Pull are, in essence, two different philosophies of controlling inventory. Below are some of the points where the methods, and the systems, differ.

The origins of MRP go back to the early 1960s, a few decades before the widespread computerization of the nuts and bolts of manufacturing logistics. Its inventor, Joseph Orlicky, developed the system in response to the established Toyota Production System (later known under the generalized name of Kanban). In 1975, Orlicky put out a book on MRP that’s since become one of the bibles on the subject.

The Push mechanic behind MRP operates on the following principles:

Kanban, a Japanese term translating to “signboard,” came to fruition in postwar Japan when Toyota was looking to increase the efficiency of its factories. Employee Taiichi Ohno drafted the Toyota Production System based off observations on the way inventory was managed at supermarkets: shelves were stocked with no more goods than the store expected to sell, and customers didn’t take anymore items than the ones they needed.

Which One’s Better?: The Debate

Despite the fact that both systems have been around for more than 40 years now, the debate over the merits of MRP and Kanban still continues. Much of the tide has seemed seems to be against MRP the past few years, with commentators like Kevin Meyer pointing out that Orlicky’s system was designed for a different era in which different, less expensive types of goods were being manufactured compared to today’s complex products.

Kanban has its flaws as well, especially when it comes to responding to dramatic disruptions in supply or demand, which having a minimal inventory surplus could exacerbate. Ohno actually anticipated this criticism of his system and provided a rebuttal, saying that by trimming down the excesses around the production process, exposing the manufacturer to the potential dangers mentioned above, Kanban drives manufacturers to redouble their efforts into boosting efficiency across the entire enterprise.

The shortfalls of both systems have resulted in some companies developing hybrid Push-Pull systems where demand estimates are far more accurate and inventory quotas are driven by study of actual sales figures. Hybrids like these could very well be the manufacturing system to look at going forward.