Big Vs. Small Companies: Where Are the Differences on Innovation?

Anyone who has worked for both a large corporation and a small, entrepreneurial company can talk endlessly about the differences in the two cultures and mindsets. The differences can be stark. Let’s look at a few that impact the way the two types of organizations approach open innovation: 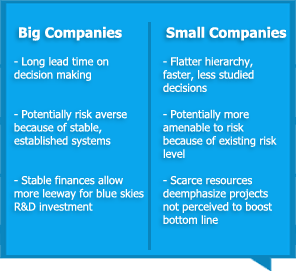 Large corporations, with their abundance of silos and bureaucratic levels, often require considerable time to make decisions. Analysis paralysis is not uncommon, with decisions that seem simple to an outsider taking ages to make. In contrast, in smaller organizations decision making can be fairly rapid.

Thus, when these two types of organizations come together in open innovation, the smaller company may find the speed of progress frustratingly slow. At the same time, the people from the large corporation may be troubled by the constant please of the smaller partner to move faster. Both sides may be left feeling the other side just doesn’t understand them.

Intuit, a California-based maker of financial software, understands that the reply time they can offer potential partners in their ecosystems is critical for how they are being viewed on their efforts. As a result of this understanding, they try to provide a clear go / no go within just 48 hours when they stage their Entrepreneur Days. This can take weeks or even months for many other companies.

How large and small companies feel about risk-taking can vary considerably. Particularly where the smaller company is a start-up or still in a fast-growth stage, the organization at all levels may wholly embrace risk because, at this point, the whole business is a risk. However, in a large corporation that has been around for decades, people may be far more vested in keeping things are they’ve always been than they are in trying something new and potentially risky. Here again, this difference can lead to frustration on both sides when two such organizations engage in an open innovation partnership.

In a small company, every penny counts. Resources, which can be scarce, are allocated based almost solely on whether they will boost the bottom line. This bottom line focus may not be so distinct in a larger corporation. With more abundant resources – at least in comparison to smaller companies – people in corporations may be relatively free spenders, although this is certainly not always the case and hasn’t been in recent years as the recession has taken its toll.

However, the small company may expect their larger partner to foot every bill and not understand that even big companies have their limits. The result of such a relationship can be similar to problems that arise when two people with very different attitudes toward money and spending get married.

The list is much longer. What would you add?

[This post originally appeared on 15inno and is republished with permission.]
Looking for information on software you can use to drive innovation at your organization? Check out our Top 10 Business Process Management software report. Also, make sure to take a look at our full collection of best practices blog content.

Author, Speaker, Consultant, Big Vs. Small Companies: Where Are the Differences on Innovation?
Expert in Open Innovation, Social Media and Intrapreneurship
Stefan Lindegaard is an author, speaker and strategic advisor. His focus on the topics of open innovation, social media tools and intrapreneurship has propelled him into being a trusted advisor to many large corporations. He believes open innovation requires a ...