Oh, the joys of social media! The great strengths of social media – how fast it is, how easy it is to reach a large audience, how it sponsors open discussions – are also its biggest flaws when used improperly. The growing popularity of social media in business has led to an increased number of marketing blunders that viral out before the culprits have even noticed their mistake. Here is a list of the four worst social media disasters of 2012 and what you can learn from them in 2013.

When Wilcoxson’s Ice Cream’s CEO decided to answer a fan question on Facebook, the conversation quickly turned sour. The CEO wrongly assumed the fan was from Pakistan, causing an upheaval that quickly spread to other platforms like Twitter and Reddit. The results? Wilcoxson shut down their Facebook page and the CEO resigned, but no official apology was ever made. In short, Wilcoxson Ice Cream chose to abandon all their Facebook fans rather than own up to their mistake. 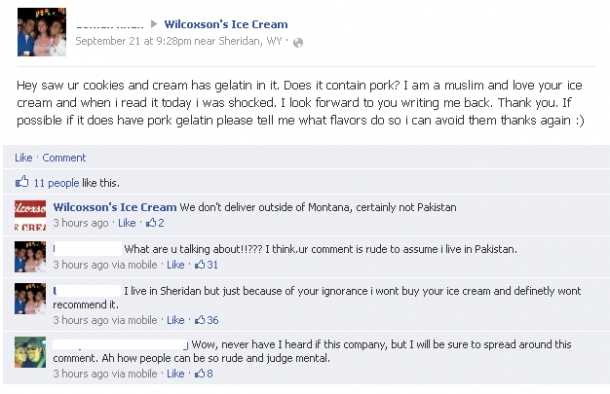 Look instead to Kitchen Aid for some advice on how to properly handle a social media blunder. When a Kitchen Aid employee accidentally used the corporate account to post an offensive tweet about President Obama, the tweet was quickly removed. The Head of the Kitchen Aid Brand stepped in and offered a public apology.

Rogue tweets aren’t uncommon. Tools like TweetDeck or HootSuite, where you can add several social media accounts into one platform, make it all too easy to send a personal tweet to your corporate account. Take this Red Cross employee who got her accounts mixed up. Watch the online discussion unfold from the rogue tweet to the employee realizing her mistake and the Red Cross finally doing damage control: 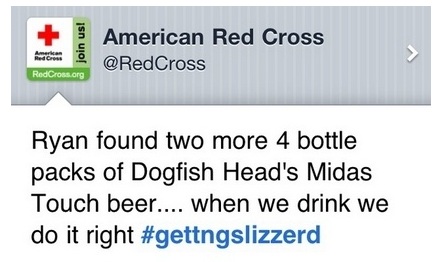 The Red Cross saved face in an eloquent, funny way. What’s more, when Dogfish Beer caught wind of the #gettingslizzerd hashtag, they called on their fans to donate to the Red Cross. As a result of quick damage control and effective customer engagement, the Red Cross managed to turn this social media debacle into a positive experience:

2. Know Your Customers & Know How to Engage Them

When McDonald’s decided to invite their fans to share their favorite memories and stories of the fast food giant using the Twitter hashtag #mcdstories, the outcome wasn’t quite what their marketing department had expected. Twitter users began sharing McDonald’s-related horror stories:

Lesson learned? When using a hashtag, make sure it can’t be easily taken out of context.

To make matters worse, McDonald’s employed the tactic described above: they didn’t want to publicly address the problem. Rather than calling their real fans to action or retweeting any positive #mcdstories, the company remained quiet throughout this social media mess.

But the advance of social media has also spurred the development of many software solutions designed to monitor customer sentiment and target your marketing outreach accordingly. Take Get Satisfaction, for instance. There is no lack of options to stay in control of your marketing campaigns and minimize the risk of your messaging going down the #mcdstories route.

A good example is the UK-based feminine care brand Bodyform. When someone left a funny message on their Facebook page claiming false advertising, it sparked an enormous amount of “likes” and comments. The company did not ignore the message; instead, they made a comic response video in which the CEO apologized for their “lies.”

Speaking of customer engagement, when Greenpeace accused Nestlé of contracting a company that destroyed Indonesian rain forests, activists flooded Nestlé’s Facebook page with KitKat logos that had been altered to say Killer. Rather than offering a tactful response, Nestlé went on the defensive: 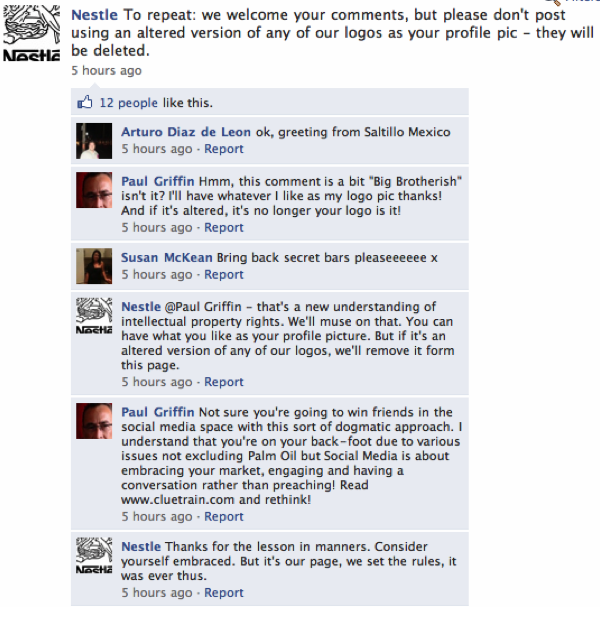 A now classic example of bad customer engagement, Nestlé’s major stumble did have a positive outcome: Nestlé cut ties with the Indonesian palm oil company that was responsible for the deforestation.

4. Know Your Timing (and Don’t Take Advantage of Other People’s Misfortune)

When riots broke out in Egypt earlier in 2012, Kenneth Cole sent out the following tweet:

On a similar note, the morning of the Aurora movie theater shootings, the NRA posted this:

Brands should know their timing. Social media is about immediacy, but that doesn’t mean companies should act impulsively. By the time Kenneth Cole apologized, for instance, the hashtag #boycottkennethcole was already born.

A marketing no-no on par with the examples above is taking advantage of someone else’s misfortune. While trying to ride on the coattails of a big event might seem like a great and free marketing opportunity, companies should always be sensitive to the nature of these events: customers are people first, not buyers. Here’s a short list of breaking news you shouldn’t base your marketing campaign on: hurricanes, earthquakes, fires, terrorist attacks, high school shootings – and the list goes on. Learn from these brands: 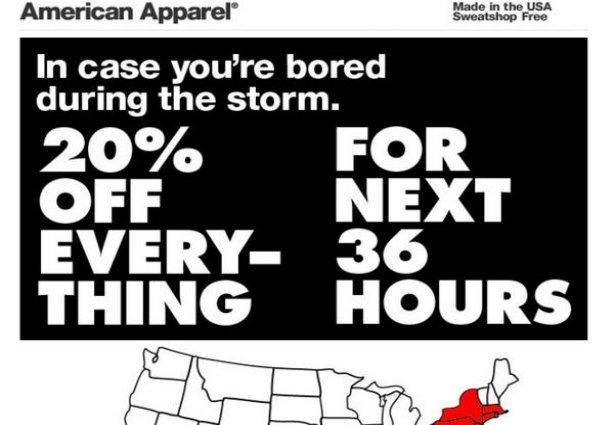 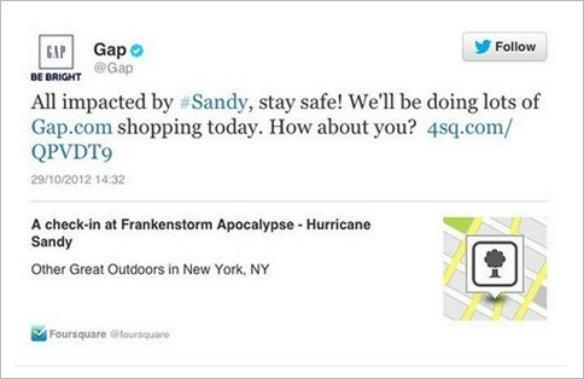 Want to read more insider-perspective posts? Browse our entire archive of blog posts on news and trends in the industry by visiting the Trends and Events section of the Business-Software.com blog.