A Duel of Music Apps: Can Apple Music Overtake Spotify?

Music may be a passion for some, a way for others to relax, and a form by which to pass the time for yet others. As with virtually every industry in America, however, innovation and a thirst for the next big thing are bringing great technological advancements to the forefront of how we consume music.

With more open floor plans in business and a much more lax feel, music is a mainstay in modern office environments. In the Silicon Valley in particular, there is a newly constructed culture of listening to music and doing work simultaneously. And with computers being the platform for the majority of in-office work, music has become one of the methods to help people focus and get their work done. I’m even listening to a Grateful Dead ballad as I pound away at my keyboard, writing this article. People are listening more, and music streaming services are doing more for their listeners.

About five years ago emerged a sleek-looking service known as Spotify that became the one-stop shop for many music listeners. Taking advantage of its first-to-market opportunity, the platform stole a lions’ share of all music listeners. Yet recently a new, potentially more powerful contender from technology giant Apple has entered the arena. Since its release, Apple Music has been referred to as the “Spotify Killer” or “the next big thing in music.”

With so many people expressing opinions on the competition, I decided to take a look at their features and find out which app offers greater functionality and a better user experience.

Make no mistake about it, these applications are more than adequate — and both will bring you a very similar music service. But at the end of the day we’ll all have to choose a side (unless you don’t mind paying for both), so let’s see exactly how these platforms stack up once and for all. It’s time to answer the trending question: will Apple Music overtake Spotify?

Right off the bat, I think it is best to look at how these two companies stack up in terms of basic, core features. After all, the novice user will likely not care about all the bells and whistles and probably be more focused on what the platforms include up front. Both services offer an approximately 30-million-song library, and they both give you direct access to songs previously downloaded to your computer (from iTunes or elsewhere).

However, the two apps do bring you some similar services in different ways:

In a way, Spotify has veteran status when it comes to the interface. People who have been using the app for the past few years understand the platform, and even those who don’t have it are typically able to maneuver the app. Spotify does not have Apple’s effortless elegance and visual appeal, but it offers features that provide you with a fluid music experience. Perhaps one of the best functions that Spotify provides is the ability to accomplish any task from anywhere within the platform. For example, you can create, edit or follow playlists while browsing, using the chat feature with a friend or even working out.

The one thing Apple Music does have over Spotify in terms of UI is the same quality every Apple product has ever possessed: an interface with a sleek, intuitive look and feel. At first glance the interface is creative, clean and undaunting. However, navigation in Apple Music is not as simple as one might think after viewing the interface. Keep in mind that Apple just released this service and will most likely be making changes in the years to come; but as of now, the app is stagnant with its fluidity.

Each task has its own section within the platform, which you need to revert back to in order to perform whatever task you wish to do. For example, if you have followed a chain of similar songs deep into the app, you have to leave all of your search history behind to get to the playlist section and create a new playlist. The flow of the app may improve, but as of now it’s a step behind Spotify. 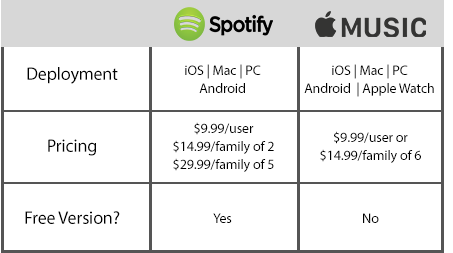 Spotify has a social capability that is pretty much unrivaled as of right now on the music scene. You can follow anybody who has an account and access their music selections including playlists, what they are currently listening to, their friend list and recently played tracks. Any user can also send an album, song, artist or playlist to any person they follow or are connected with. On the same portal, you can chat with the selected friend about the song or songs being shared.

Spotify is a fully social musical platform that allows for sharing among any of your friends. You are not limited to sharing music to one selected friend through chat; you can also share songs with all your friends or coworkers at once, similar to a Twitter or Facebook post.

Apple Music, on the other hand, only allows you to share an artist, playlist or album through outside social platforms such as SMS, Facebook, email, etc. It lacks the true social component that Spotify is able to offer its users at this time.

Apple Music does offer the Connect feature, which is a social media platform where artists can share songs, albums or new releases with fans and users can follow their favorite artists. This function holds promise as becoming the new place for up-and-coming artists. While getting updates from artists is nice, it does not compare with the wealth of social options that you get when using a service like Spotify.

Spotify seems to be genuinely concerned with finding you new and similar music based on your listening history. It has a strong focus on indie, lesser-known and underground artists. Some things the platform does well include:

Apple tends to offer more of a mainstream look and feel to its music suggestions. While the app will give you music from the artists that users have specified as favorites, it tends to merely suggest an artist’s most popular albums and songs due to the high demand placed on the people behind the music suggestions. However, here are some things Apple Music does well:

As I previously mentioned, both services will allow you to listen to your favorite music. However, as of right now Spotify seems to have the upper hand, having figured out the entire platform on a much broader scale. This should not come as much of a surprise, because Spotify has been out for a much a longer period and has had time to make adjustments and advancements to their interface. It’s also worth noting that Spotify has a much broader selection of music and app functions available.

In addition to everything mentioned, Spotify provides creative features such as offering playlists for different activities of the day like studying, relaxing, partying or traveling — great for times when you want a type of music without searching or scanning playlists. Spotify also has a running music feature that detects your running pace and selects songs that keep up with that pace for a better cardio workout. Creative features like the running function are what really set Spotify apart as of now and allow for a simple and seamless music experience. Better said: If you like music, Apple Music will do — but if you love music, go the improved user experience of Spotify.

Interested in reading more software news and trend pieces? Be sure to check out the News & Trends section of the Business-Software.com blog, which features expert articles created in-house that cover a variety of popular topics in the softwary industry.