Business VoIP Phone Services: Not All They Are Cracked Up to Be 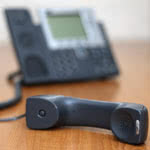 Let’s not get the wrong impression from the title here; there are many serious advantages to switching your organization’s telephony over to Voice over Internet Protocol (VoIP). It’s by and large much cheaper than setting up a traditional call center network of land lines, it’s generally much easier to setup and has much more extended functionality as well. (integration with software tools, built-in call forwarding, etc.)

But if there’s anything we’ve found out here at Business-Software.com, it’s that there’s no such thing as a perfect software solution, and despite the leaps and bounds with which the tech has improved since the late 90s, VoIP is still far from perfect for every office setup.

A lot of the downsides are simply the realities of the way technology works—power failures happen, every network has a maximum upstream and downstream of data, no data transfer is ever going to be completely secure. Regardless, these are some of the bigger issues a company should have in mind when considering a switch over to full VoIP telephony.

It’s almost inevitable that power to your building will be cut or disrupted at some point. It’s also inevitable that productivity is going to be lost, but keep in mind that during many outages regular phone lines stay up and running since get their power through the phone line itself.

In contrast, VoIP is dependent on whether you can maintain internet connectivity. If an office router goes out, or worse, gets fried during a power failure, the office’s ability to send or receive calls via VoIP goes dead too. While this concern might seem a little quaint in the age of cellphones and BYOD, consider a scenario where an important conference call needs to happen, or cellphone coverage is somehow disrupted as well. VoIP phones would be inoperable in situation where a network of standard land line phones would otherwise still function.

That’s not to say there isn’t any recourse for VoIP during a power loss situation. An office with a backup generator can conceivably continue to route power to the network routers and maintain connectivity for a limited time, at least enough to make necessary calls out. A dedicated backup system might be out of the price range of smaller businesses, however. This Consumer Reports article, geared towards home VoIP uses, outlines a few steps setting up a more affordable smaller backup generator which could conceivably be applied to a smaller or home office.

The nature of the network is that there’s only so much bandwidth to go around. VoIP communications consume bandwidth the same way downloading or uploading a data packet from or onto a node on the network would.

Small teams and individuals won’t run into too much trouble (unless your network connection is archaic), but start hooking up more and more people and the bandwidth consumption can start to rack up quicker than one might expect. Just how much those communications will cost in bandwidth depends on which codec is used to convert the voices into bits and back again. A codec is the system through which data in encoded and decoded, typically into different formats. For example, teleconferencing software uses a codec to translate video data into digital bits transferred along fiberoptics.

Many contemporary VoIP providers, those geared towards business and otherwise, use some form of the high fidelity G.711 codec. A call encoded on G.711 takes up roughly 64kb for every second of speech. That’s a paltry sum on its own, but if you’re going to have dozens of people making outbound calls simultaneously even the high quality G.711 audio transfer is going to suffer, resulting in stuttering and gaps.

It’s absolutely essential that you do the math homework using several variables:

The good news is that there are plenty of tools out there to help in the calculations. In particular we recommend taking a look at Rheid Communications’ Bandwidth Calculator, which can provide a detailed breakdown on the bandwidth costs of any number of simultaneous calls using various different codecs. You can also have your broadband connection analyzed using RingCentral’s Quality of Service tool. This tool only provides data based on the metrics of RingCentral software and devices, but it will give you a solid ballpark idea of how your network and a cloud-based VoIP solution would work together.

The reality is that there’s no such thing as a perfectly secure transfer of data. By transferring your phone communications onto the network you open up those communications to the same security risks that threaten any other type of data you have. In contrast, listening in on a conversation using traditional telephony requires a phone tap.

This article by Jaymes Marsh of 3CX, an enterprise-grade VoIP vendor, provides an excellent outline of all the ways to ensure secure communications.

None of these problems should be seen as a definitive deal breaker on an office VoIP service. All of them can be solved, or at least mitigated, with careful planning on the management end of things as well as implementing some improvised solutions and fail safes.

The responsibility lies with the company itself to take the downsides into account and judge whether the means of mitigating them are going to end up negating the savings in time and resources that a VoIP service would have provided in the first place.

Want to learn more about VoIP solutions? Read this piece on VoIP and CRM integrations or download our free Top 10 VoIP comparison report.