Why Subscription Billing Will Cost Adobe the Nonprofessional Market 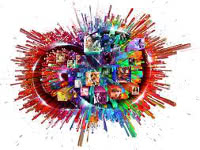 Last week fellow Business-Software writer Chris Chang blogged about the Adobe Controversy and how the new Creative Cloud subscription billing model was the right move —  for him, for Adobe, and for designers as a whole.

As a graphic designer, he can always remain updated on the latest tools through Creative Cloud. He won’t have to suffer from an unbearable up-front cost of a new suite every couple years, held captive in the current suite when new features (already developed and ready to implement) are reserved for the next suite’s release.

The convenience of access, the always-up-to-date features, and the elimination of massive up-front costs is a consumer and business-friendly solution. Subscription billing provides right-here, right-now benefits. And looking at the rapid adoption of cloud technology, it was a matter of time.

But why would somebody like me (who is not a graphic designer, desktop publisher, or filmmaker) feel disconcerted about this change?  Adobe is performing a service that is more practical for professionals.

Then Adobe finds those like me — nondesigners with the occasional creative need to throw together a book on InDesign or alter an image for Facebook —  who need to face a choice of whether to subscribe to Adobe or not. And with a subscription bill that is over twice the cost of my utility bill and six times the cost of my gym membership, I have a lot to think about. 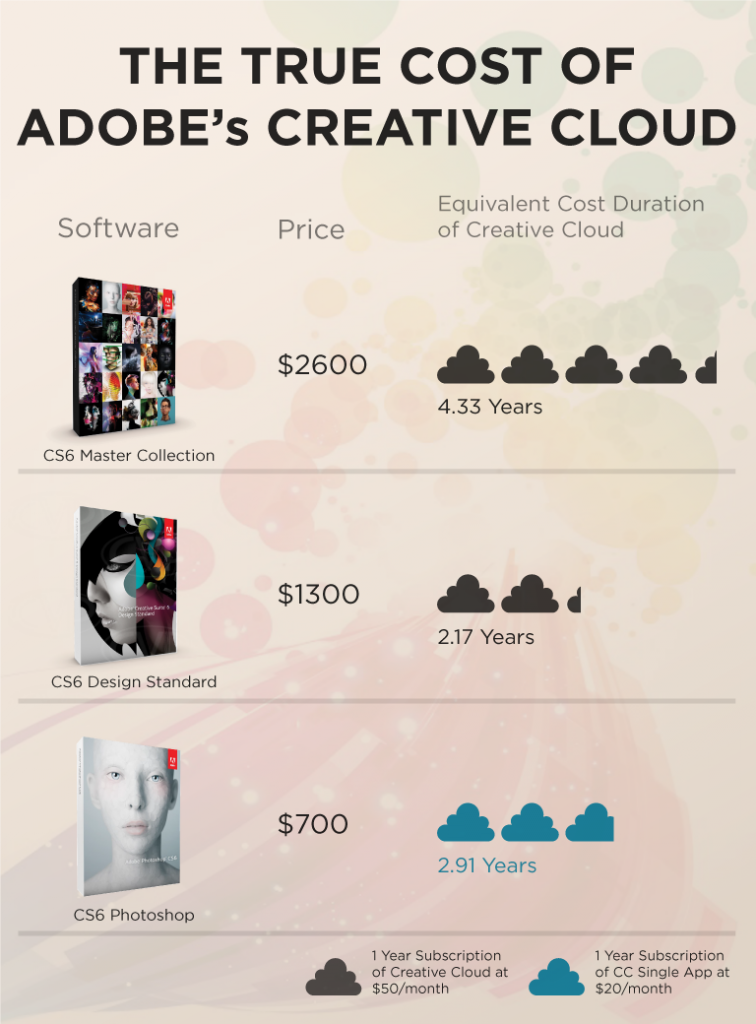 Because subscribing to them all is temptingly close to subscribing to two apps (with each app costing $20 per month), we are inevitably going from tip-toeing on ice to toppling into the full subscription.

This is a fantastic move on Adobe’s part. Allowing one application at $20 sounds reasonable. But Adobe’s products don’t thrive in isolation. They feed into one another. A low-budget filmmaker who uses Premiere to edit footage will want to dabble in After Effects for visuals or Audition for sound. A desktop publisher who creates the occasional zine will need at least Illustrator and Photoshop too.

Everything works together, so even when starting with the Creative Cloud diet, we will soon find ourselves putting in more money than we can afford to use a small percentage of the Master Suite’s functionality. We may only even use it a couple days a month — or even months apart for amateur filmmakers who need Adobe in post-production alone.

In the context of the Master Suite, everything is worth it. Paying for that one CS6 suite is the same as being subscribed to Creative Cloud for well over 4 years. No more emptying wallets or looking under the couch for that forlorn credit card to pay for the next CS.

Logically most of it sounds positive. An always-brand-new Master Suite is now more accessible than it ever was. Yet, something still irks me. After fantasizing about affording, using and loving the Master Suite, I return to reality always with the same concern: what about the later adopters?

I am not an early Adobe adopter. According to the adoption bell curve, neither is approximately 84% of Adobe users. Courses at universities on Adobe products often allow (or won’t notice) submissions made by old Adobe versions. A few years out of manufacturing, suites appear in discount bins for those with tighter budgets.

Perhaps $2,600 for a brand new CS6 Master’s Collection sounds outrageous, but what about an old version at a quarter or half that price? A full Master’s Collection of CS3 can be found at Amazon for $300 and a full Creative Suite of CS5.5 goes for as little as $500.

I try to hold on to (and watch slip away) that right to buy and sell goods. The level of work we achieve (dozens of memes, a friend’s head on a giraffe) doesn’t require cutting-edge technology. Rather, we want something less-than but not nothing altogether. We love Adobe. We’re familiar with it.

Making the switch to the cloud is not something I will have to implement right away. The old CS suites will hold up for years. But knowing that these suites will soon become scarce, and eventually obsolete, will push me to accept that I have to fall into the rank of the always-early-adopter or live without that technology altogether.

For the majority of non-professional Adobe users like me, we’ll have to make an important choice that will affect our finances and the amount of time we commit to Adobe technology. We must either go all in — or opt out.