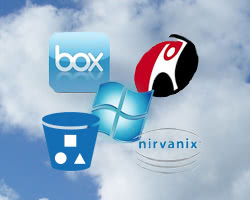 Of all the services currently following the trend of migrating onto the cloud, the one that still generates the most uncertainty is cloud storage. For several years now the players in this segment have been working to address the concerns that rack the mind of many a CIO and/or IT department who happen to be considering a potential switch over.

Moving enterprise data offsite is, for many, a security nightmare waiting to happen, in addition to all the standard worries about total cost of service (TCO) and connection fidelity that come with Infrastructure-As-A-service (IaaS) in general. To provide some assistance we’ll take a look at a handful of bigger competitors in this space, what they bring to the table and how they intend to address the problems described.

As part of the Amazon Web Services suite, S3 isn’t strictly for enterprise clients only, but the service has arguably built a strong identity as a provider of high-fidelity cloud storage to enterprise users and businesses. In fact, Amazon’s storage service has found popularity among other consumer/subscriber-driven companies like Tumblr and Formspring, who host all uploaded images through the S3 system.

Getting specifics on the security architecture of S3 is easier said than done, however, as Amazon keeps the specifics of the technology behind it and most of the rest of the Amazon Web Services suite behind a curtain of secrecy. That said, the service allows enterprise users to secure any data uploaded to the Amazon cloud using Server Side Encryption. User-defined Identity and Access Management policies, Access Control Lists and web data transfers secured by Secure Sockets Layer all add additional security layers. Amazon maintains dozens of remote data centers around the world to store redundant copies of all uploaded data as a failsafe, a measure that’s led the company to boast that S3 features “99.999999999%” data durability.

Since getting its start in early 2010, Windows Azure has offered a full suite of features in both IaaS and Platform-as-a-Service ) PaaS areas including data storage in the cloud. All data hosted on Azure is uploaded through a specialized version of the familiar Microsoft SQL Database. With SQL clients are able to recreate the same databases they might have hosted on-premise for use in various hardware-demanding purposes like Big Data analytics.

Microsoft’s Global Foundation Services is the corporation’s department for all things data security, and the integrity of Azure falls under that category. GFS has provided a full security overview of Azure which outlines how they intend to maintain the service’s standards of “confidentiality, integrity and availability.” Azure might, however, suffer from something of a bad rep, especially in the technology community.

Unlike Windows Azure’s all-inclusive package (though users are able to pick and choose which services to subscribe to), Nirvanix specializes in cloud storage for enterprise-level clients who need data hosting capabilities measuring up into the petabytes. The company offers three distinct categories of storage service depending on client need: public cloud storage, hybrid cloud storage and private cloud storage.

Nirvanix’s list of security and data integrity measures is an exhaustive one, including alongside server security features a series of physical security measures including biometric scan access to data centers, the sorts of surveillance cameras used and “bullet-resistant exterior walls.” A partnership deal with data center company CenturyLink earlier this year is slated to provide a boost to Nirvanix’s reliability and upload times.

Since 1998 Rackspace has been providing hosting for companies through data storage as well as other remote services like website hosting and Cloud Servers. It boasts low cost (free cloud databases and only $4/user/month for cloud drives) and quick deployment among its chief advantages over the competition.

Rackspace’s security measure were briefly called into question in 2010 when a hacker group used a number of their servers as jump-off points for an elaborate hacking attack against Google. For its own part, Rackspace posts a brief document detailing its security measures, billed as part of their “fanatical support” credo. That said, Rackspace has seen a drop in both individual and enterprise users as many move onto Amazon Web Services–citing storage elasticity (storage space that grows or contracts organically with the amount of data uploaded) and greater reliability as reasons for the change.

A relative newcomer compared to some of the other providers on this list, Box has nevertheless gotten plenty of attention for being a cloud storage company unaffiliated with the larger server side resources of a Microsoft or Amazon and focusing on the enterprise market. Despite the enterprise focus, Box takes many of its design cues from the decidedly consumer-directed Dropbox (and not just its name). The two services share similar interfaces and pricing models, with Box offering up to 5GB of hosted storage for free, an obvious gesture towards the small business community.

Unlike Dropbox however, Box has been able to maintain operations since 2005 without any major security breaches (that we know of), providing continuous service to a client base that’s now into the millions. With its friendlier interface and smaller-scale objectives, Box seems intent on marketing itself as a less-imposing alternative to huge providers like Amazon S3 and Nirvanix, which see use by multinational enterprises with need of secure storage of big data and hosting of huge media files. Despite that, Box will still need to prove its infrastructure capable of providing a high degree of signal fidelity to be able to come up to snuff as a real enterprise data storage provider.