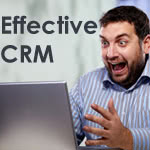 For how ubiquitous CRM systems have become at most any sales or contact-oriented business, it’s amazing how many ways the average system can (and does) fail. Granted, much of the blame for this falls on companies who didn’t do their homework to figure out which system is the best fit for their team and its specific needs, but poor design decisions, rudderless development and inscrutable interfaces don’t help either.

Most people who use a particular CRM system aren’t using it out of any great affection for the service. They’re using it because the decisions on software adoption are made at the top and then trickle down, and mandates for its continued use by everyone have to be made for the system to continue being a useful one. That said, those kinds of mandates can only go so far, and doesn’t free developers from the need to craft systems that are intuitive, useful and engaging enough that users will be compelled to use them regularly and enthusiastically.

To help out in that goal, we put together a list of four things that the best CRM systems out there get right:

Being Easier to Use Than The Alternatives

By this we don’t mean being easier to use than other CRM systems (though that’s obviously important as well). What we mean is being easier to use than whatever ad-hoc systems are used in place of CRM altogether. That’s everything from Post-It Notes to an Excel spreadsheet to, yes, paper and pen. It might seem laughable to compare those things to a piece of modern software, but consider it for a moment: information written on Post-Its has instant visibility for the user. Data input on a notebook is instantaneous and can be customized in an infinite amount of ways. Finding a name on a spreadsheet is as easy as hitting “Ctrl+F” on the keyboard.

Striking a Balance Between Feature Requests and Core Functionality

One thing most all software engineers learn early in their education is that The Client Doesn’t Know What He Wants. As such, part of the job of creating software is helping to guide the client towards clear functions that they want out of the system and on which the developer can deliver.

Many of the developers of CRM systems, as it is with any kind of software that has moderate to large numbers of users, receive massive amounts of user feedback on their product. Besides bug reports and technical support much of this feedback is recommendations and feature requests from the community about what should be added to the product to make it better. Receptiveness that kind of feedback is vitally important; it builds rapport with the user base and brings in perspectives that might otherwise have never occurred to the core development team.

On the other hand, however, it’s equally important that developers establish a central vision for what their product is supposed to be. Too much enthusiasm for throwing in half-baked requests from the community can lead to the feature creep effect, where layers and layers of iterative features gradually pick away at the product’s overall effectiveness. The result is a bloated system that’s most likely going to be too clunky for all but the most devoted power users.

Fast, Cheap and Good: pick two, because you can’t have all three, or so the saying goes. Most business software doesn’t come cheap, and if it does, there’s always the concern that it might have an anemic set of features, or, even worse, be insufficient for the needs of the organization.

At the end of the day a good CRM system–being a system for the optimization of the sales cycle–should help a team contribute to the bottom line of the organization. That said, there are many slightly more intangible benefits that a CRM system might bring to a company and its employees. A system that’s easy to use, inviting and effective will drive users to use it regularly and actively, creating a positive feedback loop where the contribution of more information to the database by users boosts the system’s overall effectiveness (the more data available on leads and contacts, the better the chance of closing the sale with them).

First contact, negotiation and making the sale are just the first step. A client doesn’t disappear off the face of the Earth the moment you close the sale.

Effective agents manage clients all the way through the process, taking feedback, maintaining the relationship and keeping the lead warm. An effective CRM system is one that will help agents carry out those tasks with tools like followup reminders, tracking of email and social media conversations and pointing out prospects for new or improved business.