Why the Salesforce Cloud Keeps Getting Bigger 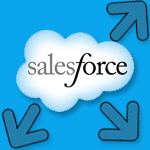 A recurring statement we hear from many of the smaller software companies talk to is that you just can’t compete with Salesforce. And the observation is especially prescient now that the company has its hands in more software segments than ever.

That’s not to say there aren’t small to medium-sized developers out there who can out-hustle or outperform Salesforce in some regard or another (there are plenty), but they can’t outperform them in every regard. Salesforce simply has too much of a head start in personnel, money and infrastructure to be able to take on head to head as a direct competitor.

“Salesforce can do in a month what it would take us half a year to do,” the head of one company said, referring to the rolling out of new features and breaking into new segments.

Breaking into new segments is something Salesforce has pursued with gusto the past few years. The primary it’s done that is through an ongoing series of pretty major acquisitions, a trend that seems set to continue for at least the near future.

Salesforce has been acquiring companies since the middle of the 00s, but it’s in the past few years that the rate of new purchases has stepped up considerably. Not only that, but the segments into which the company has made inroads are quite notable as well.

This year’s largest acquisition was ExactTarget, an email marketing company, not just for the $2.5 billion price tag, but also because of its strategic significance to the Salesforce platform.

It will be interesting to see how Salesforce Pardot fits into the rest of the Salesforce platform. The demos at DF 2013 (on ample display on both Expo floors) were impressive enough. If nothing else, the speed with which the Salesforce team could go from purchase of the company to presentable demo (just around 3 months) is a testament to the aforementioned manpower and resources the company has at its disposal.

It’s not all clear skies for Salesforce though. Despite seeing a 36 percent revenue increase ($1.08 billion overall revenue) for Q3 2013, the company actually posted a net loss of $124.4 million according to an article on SFGate.

Between ExactTarget and other companies, Salesforce’s purchases in the marketing automation segment have racked up more than $3 billion in spending. Despite the soaring costs and red ink however, the investors seem for the most part to still be quite optimistic about the company, with stocks continuing to rise in the wake of DF 2013. Numbers that started around 42-43 in January now seem ready to end the year around 55-56 points.

What that suggests is that investors still see Salesforce as a strong bet for return on investment. What could be the rationale behind that? Take into account that the company is still taking in a ton in revenue–$1.08 billion. The company can make money, despite accruing a ton of expense.

Also, consider the fact that, according to a November article from Yahoo Finance, a major part of Q3’s 38 percent increase in expenses was a 50 percent boost of spending in research & development. R&D is a loss leader whose potential payoffs can be massive. Good R&D can break a company into completely new revenue streams, much like making calculated acquisitions into a hitherto unexplored segment.

As was mentioned at the beginning of the article, one of Salesforce’s biggest strength is the amount of power it can throw at developing new technology. As such it’s vital that it maintains that edge. It’s also why the Salesforce cloud is most likely going to keep getting bigger, at least in the near future.

Want more information on Salesforce or other CRM software solutions?
We’ve compiled the top product reviews, blog posts and premium content on our CRM software research page. Here, you’ll find all of the information you need to choose the right customer relationship management solution. Also, be sure to compare leading CRM products in our Top 40 CRM Software report, where we give you the lowdown on pricing, key features and technology models.